This was written by Bonnie Church 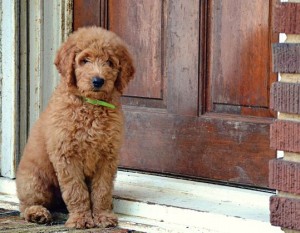 I have to smile when I read posts by brand new goldendoodle puppy owners. I know you are looking at your new puppy jumping in the air, nipping everything in sight, “killing their stuffed toys,” zooming around like they are demon possessed… You are just waiting for their head to start to spin… At those moments you wonder: “Is my dood an exception to the awesome temperament doodles are purported to have?  Do I have a behavioral mutant from the litter? Maybe re-homing isn’t such a bad idea after all…”

Rest assured, everyone of us has had those thoughts.
What often happens is the expectations on our baby-doods are unrealistic. AFTER ALL, these are DOODLES… We chose them because of their “perfect pet” reputation. We have read all the oohs and ahhhs testimonies and seen the charming photos.

Just like kids, puppies get crazy at times. They have toddler stages and teen years. Unlike kids, they grow out of them in a matter of weeks rather than years.

So don’t be dismayed…There will be far more “Ahhhh isn’t she sweet!’ moments” than those times when you are looking in the yellow pages for a good DOG EXORCIST. (Hey, maybe that’s what behaviorists do?)

Breathe deeply and relax – This stage will pass. Get a good book on dog training… It will give you assurance that all is normal and give you helpful hints on how to help your puppy grow into a responsible family member. (Suggestions: The Dog Listener, Dog Training for Dummies and The Monks of New Skete books.]

Patiently train the basics… There are differences of opinion on how to train, but the key to all is consistency. 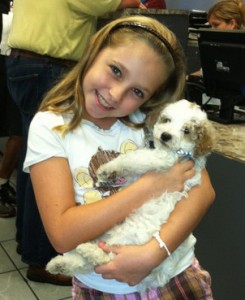 •    NO BITE (several opinions on how to deal with this. I became so concerned I would ruin my puppy if I did it wrong that I became inconsistent and Jemima was confused. I then chose a way that seemed to work, stuck with it and she is a gem now.)
•    SIT
•    STAY
•    COME
* Weigh advice – but find what works for you – and don’t worry about the multitude of “other ways” to do it.
* Get/create lots of toys (Some of Jemima’s favorites are a NOW VERY DIRTY sock filled with ice chips, and a large yogurt container that she plays hockey with. Note: We take it away when it becomes too frayed. We do not want her to eat it.)
* Remember: You are the boss, establish that fact gently and consistently. Your puppy must learn to fit in with your life. When we get overly sentimental about our puppies we run the risk of creating issues that will ultimately rob them of what they love most: BEING WITH OTHERS.

My doodle is now 5 months old. She respects me and demonstrates incredible trust and affection. (Although I know the teen challenge is ahead.)
She sleeps through the night (9 pm – 8 am). I am blessed.  (We were up every hour for the first month…I was so tired.)
She no longer nips and bites (She was a jump-and-wildly-nip prodigy for those first few weeks.) It pained me to take her furry little snout firmly (but gently) in my hand and sternly tell her NO BITE. She would whimper and drop her head like I had wounded her, but I did it consistently and guess what? She now rarely gets mouthy. And if she does, all I have to do is lower my voice and say NO BITE. (not even sternly any more) and she stops. (Sometimes she will cover her eyes with her paws and then put her own paw in her mouth, then go for a toy…so cute.)
Her exuberant jumping was a big challenge. She looks like a muppet on a pogo stick at times, but several on a forum encouraged and suggested tips that worked for them. I weighed them and applied the ones that fit with how I do things. She now sanely sits instead of madly jumping when a guest comes to the house (about 90 percent of the time, anyway.)
Take heart! This stage will pass quickly.
Savor this fleeting season of being able to completely hold them in your arms as they sleep. Sadly, this too will pass quickly.

Still have more questions about Goldendoodles? Check out our reference pages below:

About the English Goldendoodles

Characteristics of the Mini Goldendoodle

The Difference compared for Goldendoodle vs Labradoodle